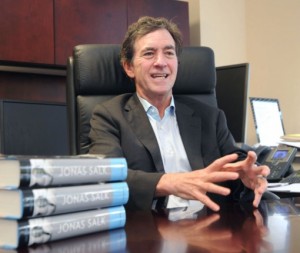 Kevin Kimberlin speaks about his late friend Jonas Salk during an interview in his Greenwich office. Salk, who died in 1995, developed the first successful polio vaccine.

“There is no such thing as failure, just giving up too soon.”

Those words, spoken by Jonas Salk, the polio vaccine hero of the 20th century, reflected Salk’s obsessive, passionate and unquenchable drive to eradicate the disease.

“His story is perhaps a story for anyone in how to tackle a problem in the obsessive way Jonas had, of never, ever quitting,” said Kevin Kimberlin, longtime friend of Salk and Greenwich resident.

In the 1940s and ’50s, polio paralyzed or killed half a million people in the world each year.

“How terrible it would be for the mother, who would wake up and not know if her child would be alive or dead,” said Kimberlin.

He will host an event at the Hyatt Regency in Greenwich Thursday featuring a screening of the 32-minute documentary “The Shot Felt ’Round the World” and a book signing by Charlotte DeCroes Jacobs, author of “Jonas Salk: A Life.” 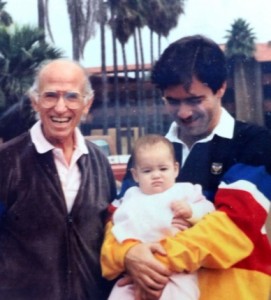 Kevin Kimberlin, of Greenwich, will host a screening of the documentary film “The Shot Felt ‘Round the World,” and Charlotte DeCroes Jacobs will sign and sell her book, “Jonas Salk: A Life,” at the Hyatt Regency Hotel in Greenwich Thursday. The event is from 6 p.m. to 8 p.m. It is free and open to the public. To learn more on the BeyondPolio website, sponsored by Spencer Trask and Kevin Kimberlin, click here.